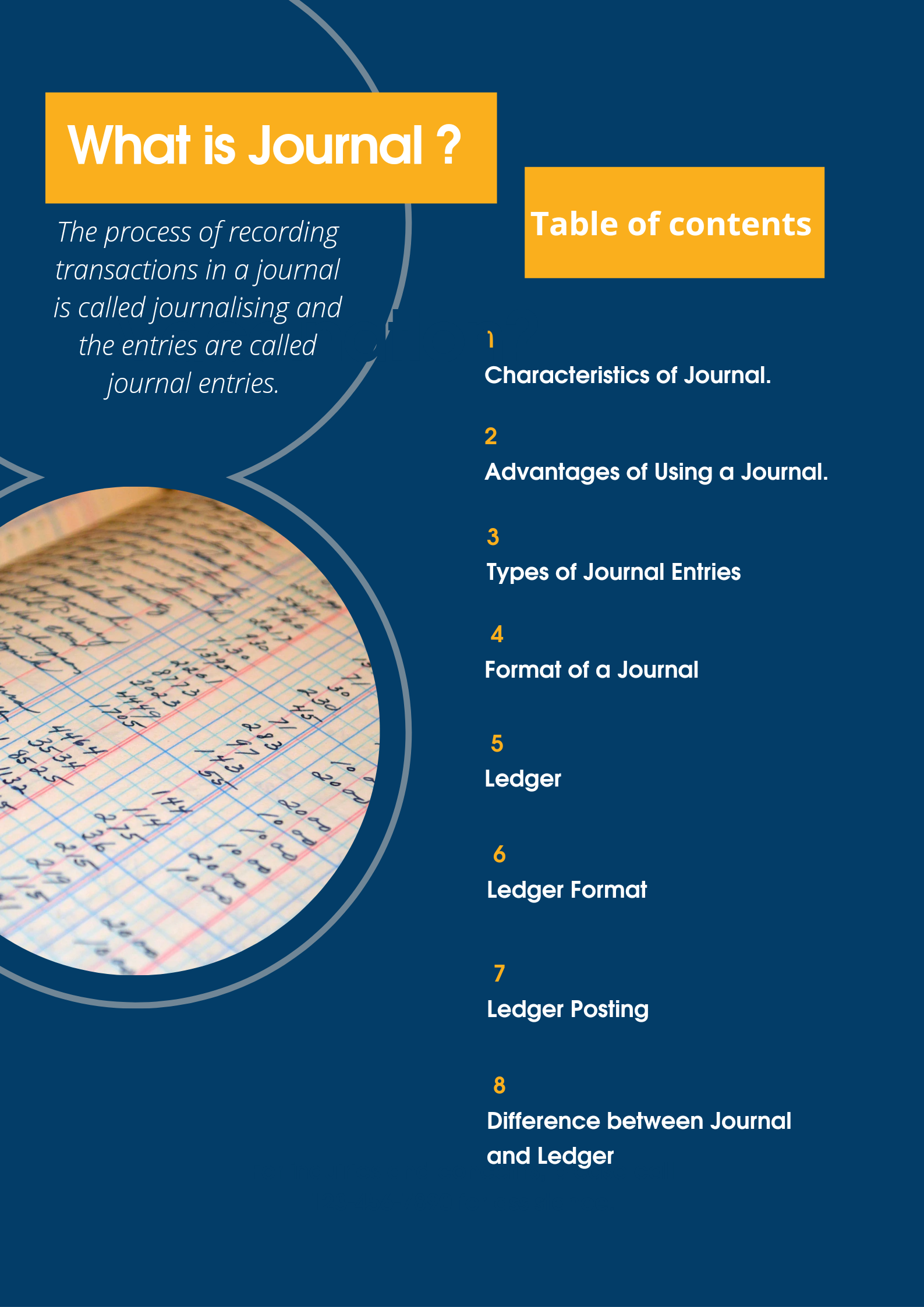 Journal is said to be the first step of the double entry system. A transaction is first of all recorded in the journal. Characteristics of Journal.Therefore, the journal is the book of original entry.

Advantages of Using a Journal

The advantages of a journal can be studied through the following points:

There are two types of entries, which are recorded in the journal:

Format of a Journal

A journal is generally kept on a columnar basis. There are five columns in the journal, which are as under:

Recording Date and Year of transaction.

This is meant for recording the titles, description of transaction and passing entries. Here the name of the Account to be debited is written along with „Dr on the first line and the name of the Account to be credited is written along with a prefix „To on the second line. Finally, a short explanation of the transaction known as narration begins on the line immediately below the account credited. The narration always appears within parentheses and is begun with the word, Beinge – which means, what it is.

Recording ledger folio number, which helps in identifying where the transaction is recorded in ledger.

The Ledger is also called the king of all books of accounts because all entries from the books of original entry are posted to the various accounts in the ledger. It should always be kept in mind that journal contains a chronological record while a ledger contains a classified record of all transactions.

Features of a ledger

Once the transactions have been entered in the journal the next step is to classify or categories them according to the accounts affected. All similar transactions are brought together through the ledger.

The features of a ledger can be studied through the following points:

When the size of organisation is very large and number of accounts is abundant, it is necessary to maintain a separate ledger for different accounts. Generally, the following three kinds of ledger are maintained by organisations:

Debtors are the clients (customers) of the business to whom goods are sold on credit. Debtores ledger contains all the details of transactions with debtors. Entries in this ledger are made mostly from sales daybooks, sales returns book and cashbook. Therefore, it is also called as Sales ledger.

Creditors are suppliers of the material to business from whom goods are purchased on credit. Purchase daybooks, purchase return book are one of the main sources of entries for this ledger. Therefore, it is also known as Purchase Ledger.

Ledger accounts are represented in “T” format. This consists of two sides, the left side represents the debit side and the right side represents credit side. Each side divided into four columns of varying sizes for the following:

Ledger Posting can be understood as the system of transferring of the debits and credits from the journal to the ledger accounts. It should be kept in the mind that the exact names of accounts used in the Journal should be carried to the Ledger.

As we know under double entry system, each transaction is transferred in two different ledger accounts, affecting the debit side of one and credit side of the other one. The following procedure is followed for posting:

Difference between Journal and Ledger

The Difference between Journal and Ledger can be studied through the following table:

Tags: Acconting, Fuctions of Journal, What is Journal

This site uses Akismet to reduce spam. Learn how your comment data is processed.